‘If you work for me, I require my employees to be vaccinated’

With just under two weeks until the Dallas Mavericks’ season opener, owner Mark Cuban has made his stance known on COVID-19 vaccinations. And it doesn’t appear that he will be backing down any time soon.

“It is your choice. It is absolutely, positively up to you. But there are consequences that come with that,” Cuban said during an appearance on 10 Questions with Kyle Brandt, a Spotify podcast. “If you work for me, I require my employees to be vaccinated unless there’s a doctor’s reason where they can’t be. I don’t want my kids to be at risk, so the consequences of you not being vaccinated is I’m not going to shut the [expletive] up. I’m going to be in your mother[expletive] ear driving you mother[expletive] crazy.”

Cuban’s statement on vaccinations comes the same week that Gov. Greg Abbott declared that Texas businesses cannot order their workers or customers to get the COVID-19 vaccine.

In late September, the Mavericks announced their updated health and safety protocol, which requires fans to either show proof of full COVID-19 vaccination or a negative COVID-19 test within 48 hours to attend games at American Airlines Center. It also states that fans, regardless of vaccination status, will be required to wear masks when not actively eating or drinking in assigned seats to comply with the Dallas County mask order.

Mavericks coach Jason Kidd said during training camp that his entire coaching staff is vaccinated and estimated players are in the “90th-percentile” of being vaccinated.

Of the 20 Mavericks on the training camp roster, only guard Trey Burke has said publicly that he is unvaccinated. The NBA does not have a vaccination mandate for its players.

“I feel like everybody has their own personal choice, and for me, I’m just getting the proper knowledge and continuing to do more and more research to make a reasonable decision,” Burke said.

Burke doubled down on his comments when speaking with Fox 4′s Mike Doocy.

“I respect the ‘freedom of choice’ in which everybody has that birthright,” Burke told Doocy. “Therefore this is a personal choice and preference that my family and I have always abided by. I believe more in holistic and naturalistic ‘medicine’ rather than the ‘drug’ industry or what we know today as ‘pharmaceuticals.’

“I don’t have any issue with the choices my teammates have made and they feel the same in return and have been in support with decision.

“I plan on closely following protocol and the guidelines that the NBA has set in place for all non-vaccinated players. But as for the shot, I am standing on my own freedom of choice and respectively declining.”

While the league has no mandate, it is acting in compliance with each team’s local market. Cities like San Francisco and New York have passed ordinances that would prevent unvaccinated athletes from participating in indoor activities. The Brooklyn Nets have reached an ultimatum with star point guard Kyrie Irving, who is unvaccinated. The Nets released a statement saying they will not allow Irving to play or practice “until he is eligible to be a full participant.”

While Dallas has not passed an ordinance that would prevent Burke from playing, he wouldn’t be allowed to play away games in markets that do have such an ordinance.

Burke averaged 6.6 points in 14.9 minutes over 62 appearances last season, the first of a three-year, $9.45 million contract he earned after a standout run as a roster substitute in the NBA bubble. But his playing time decreased throughout last season and he appeared in just two of the Mavericks’ seven playoff games.

Burke enters training camp already on the bubble and figures to be the third or fourth point guard option for Dallas behind Luka Doncic and Jalen Brunson, with Tyrell Terry and Frank Ntilikina also in the mix.

The Mavs have two more preseason games, Wednesday against the Charlotte Hornets and Friday against the defending champion Milwaukee Bucks. They will need to finalize their roster before the Oct. 26 season opener against the Houston Rockets. 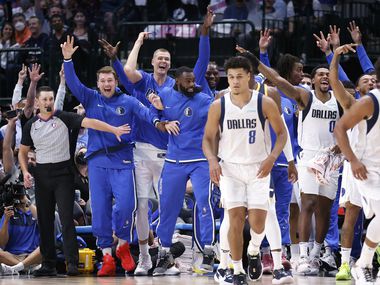 Earlier this year, Dbrand started selling matte black PS5 side plates that it called Darkplates, and when it did, it baited Sony...
Read more
Latest Science

"What's amazing about this trajectory is that we can continue to do loops through the swarms, as long as the spacecraft is healthy. And...
Read more

Earlier this year, Dbrand started selling matte black PS5 side plates that it called Darkplates, and when it did, it baited Sony...
Read more
Latest Science

"What's amazing about this trajectory is that we can continue to do loops through the swarms, as long as the spacecraft is healthy. And...
Read more
Latest Science

If you would like to see more articles like this please support our coverage of the space program by becoming a Spaceflight Now Member....
Read more
Latest Science